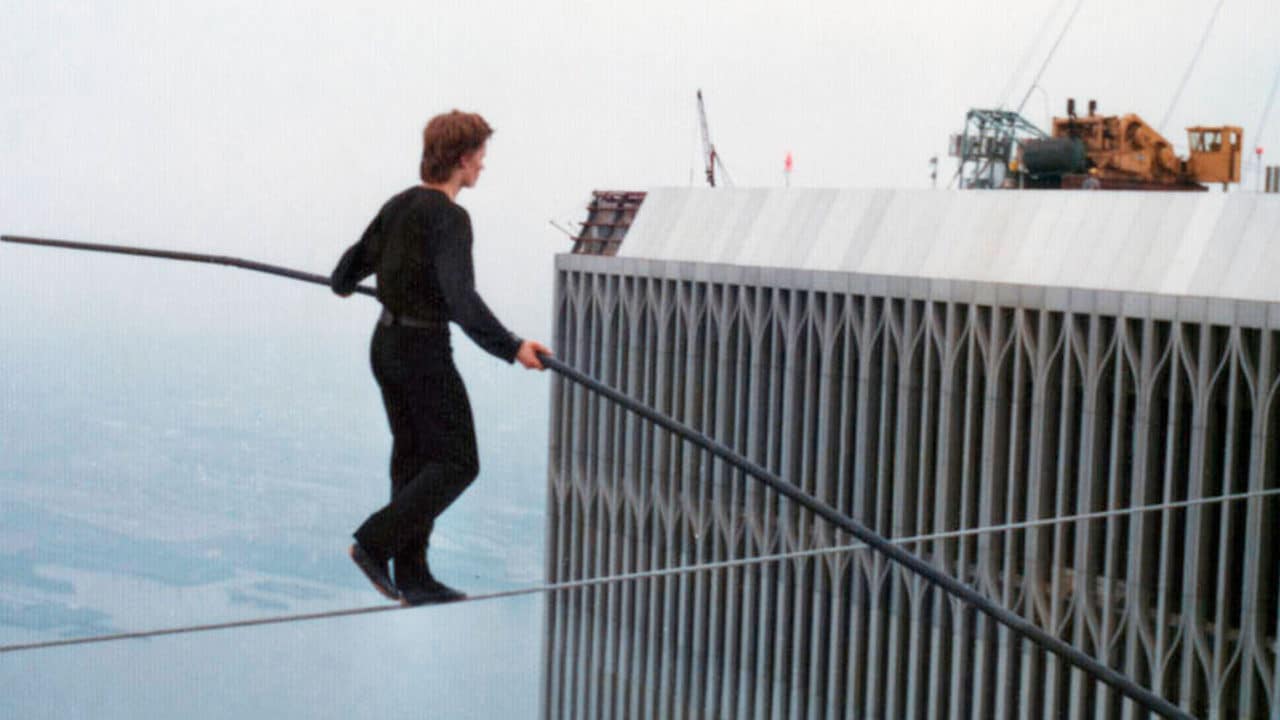 Man On Wire relates the true story of Philippe Petit’s famous high-wire walk between the World Trade Center’s twin towers on August 7th, 1974. His awe-inspiring feat turned him into a media sensation. Petit’s adventure started at a young age, when he began studying magic tricks and performed on the city streets to entertain tourists. At sixteen, he discovered his passion for tightrope walking and trained in the art for a year. One day, while waiting in a dentist’s office in Paris, Petit came across an article about the project plan for New York’s twin towers along with a graphical illustration of the buildings. He suddenly knew that he had to conquer them. The film follows his story and explores his motivation and ambition to fulfil his dream of walking across the towers.

The first part of Man On Wire introduces the audience to the World Trade Center. Historical footage of the construction of the towers is shown, with workers, cranes and trucks working together to build the colossal structures. It looks like a puzzle – a really good one. The documentary is entirely related to Philippe Petit and has nothing to do with the 9/11 attacks. In fact, the attacks are not even mentioned in the movie. This was a good decision, since it had nothing to do with Petit’s stunt. However, some people may interpret this movie in a different way: Petit has proven that the two towers could also be conquered by practice and bravery, rather than through a military attack.

Produced by James Marsh, Man On Wire contains exclusive footage from Petit’s personal collection of videos and pictures. But the film is more than that. The director has also reconstructed parts of the story with actors. One of the fascinating things we learn is the great lengths Petit and his crew went through to ensure the stunt would go according to plan. He posed as a journalist to gain access to the roof during reconnaissance missions and convinced an insider to forge security passes. On the night before the walk, Petit and his partner were almost spotted by a security guard. They quickly hid underneath a tarpaulin on a beam perched above an elevator shaft with a 400m drop beneath them. They waited for hours, daring not to move nor breathe a word until the guard left. Man On Wire is full of suspense. The action goes back and forth when least expected and keeps the viewer captivated.